Hi everyone!
I know there's some people from Chile on this forum. I'll be traveling from Argentina to do a book release in Santiago on Tuesday, Sept 3.
Here's the info. If you want to go, it's free, you just need to register yourself previously via info@big-sur.net.
We'll have two great journalist joining us: Alfredo Lewin and César Tudela. 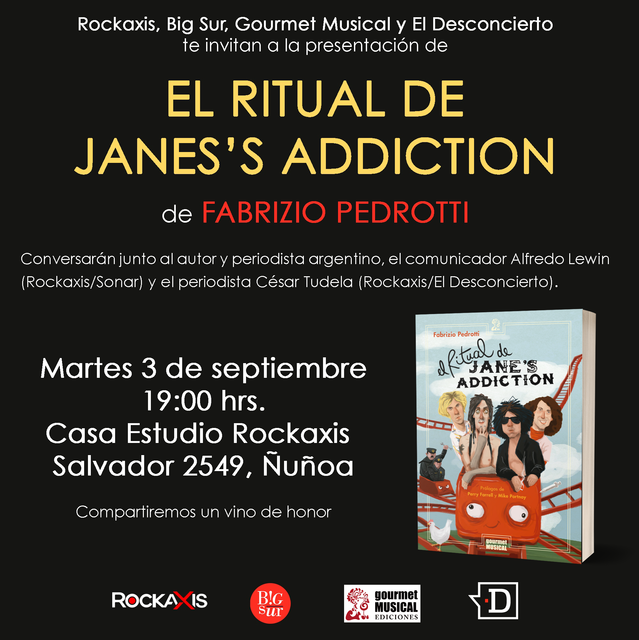 I would love to. But anyway, there's a final chapter on this book that I wrote about PFP and Jane's 2.0. Martyn LeNoble spoke there

I think Perk should write a pFp book since he clearly likes pFp and always provides good interviews. The other guys arent so interested and that's fine but Perk clearly still likes the music we like. I was disppointed with Panic Channel and his work on tgea but I after the pFp Chevy metal clips he hasn't forgotton how to jam.
Top

What interviews are you talking about where Perk trashed on P4P?
janesaddiction.org
Top

Couple of SP quotes
There are others. I've read enough to know SP
doesn't give a rats ass about P4P only in where he gets the biggest paycheck.

SP Speaking bad of P4P and good of JA

One from the P4P time period where SP admits to not liking to play the same JA songs all the
time but thats exactly what he did in the 2000's/2010's; play the same JA group of songs over
and over again to cash in.


SP: Another problem with Jane's was that we had to keep playing the same songs over
and over because that's what people wanted to hear. We never got to write new songs.

MP: But isn't that going to be just a natural part of life with any touring band?

SP: Yeah, but it's like painting the same thing over and over. You paint it once and you can let
people enjoy it, but then you should paint something else.
http://www.links.net/dox/muzik/rok/jane ... um.93.html

you can't always blame Perk for lowperformance on record when Perry won't give him types of songs he needs to work with as Bad Shit Blood Rag.
Top

You’re attempt at showing that you “know” Perk is horse shit.