This is a flyer I Frankensteined together a while back.
I used a sticker for the top half and the Kettle Whistle booklet for the bottom.

I'm wondering if anyone can confirm which of these two shows it's for?

http://janesaddiction.org/tour/tour_det ... tourID=702
You do not have the required permissions to view the files attached to this post.
"The quality of mercy is not strained, it dropeth as the gentle rain from heaven."
Top

You know what interwoven?
This poster and these two shows have been driving me nuts for a while now.

Here are some of my thoughts on these issues.

We have confirmation of the 1/10/86 show via the flyer that we have.
I know you've seen it before but here it is for those playing along at home. My personal belief is that the "Frankensteined" image above is another flyer or poster that was also created for the 1/10/86 show.

I know all this is just some nerdy stuff on my part but what follows are my perceived reasons to believe this is true.

1.) Right next to the second "D" in DAD in the "HAD A DAD" song title is what I'm sure is a "zero".
I say I'm sure but I'm not 100% certain.
I'm saying it's a zero based on the type face on the Frankensteined image.
If you look closely you can see the "O" in RADIO looks slimmer.
That alone isn't proof enough that the zero next to Dad is part of ten meaning this show was on the tenth but I've got more.

It's my opinion that the zero in that 10 although on a different image altogether is the same zero as found in my Frankensteined image.

Also if you'll notice both flyers have that line above the numerals.

I could attempt to prove this with further cannibalizing and Frankensteining but hopefully you can see where I'm coming from.

You know what I mean?
Most of the numbers are the same and all someone had to do was mistake somebody's 0 for an 8.
That doesn't seem likely in this instance with us dealing with a 1 and a 8.

I don't know how the 8/1/86 show found its way onto the list.
It was on there when I started trying to sort all this out.
Thus far I've not been able to find out much about Black Radio period.

I did however tonight after reading your post decide to revisit my archive of shit.
I remembered having seen a Black Radio ad scan unrelated to Jane's.
It took some doing but I found it!

Here's an ad for a Friday June 13, 1986 Dickies show at Black Radio from the archive.

I think the Dickies were pretty big at this point and I don't think they would have played a "rented party place".
Although when Jane's played the same venue in January they were opening for Tex & The Horseheads who were a pretty big deal back then too.

Maybe the Jane's / Horseheads show was so cool the Dickies rented out the same space?
I know Casey states in Whores that they rented the Black Radio building on page 55.
I've no reason to doubt her and she after all was there.

Perhaps the owner of the Black Radio building thought he could keep renting out the building and turn a profit?
Maybe he rented it out to somebody that turned it into more of a regular club?

I'll be dammed if I know.

One thing that is certain is the address of the Black Radio building is 6353 Hollywood blvd Los Angeles, CA.
If you Google it you can see what's there.

This is only important because both the 1/10/86 Jane's / Horseheads show and the 6/13/86 Dickes show definitely took place at the same place.

And that's only important because it shows that building was used on more than one occasion for a show.

All of the above is speculative but it's what I think is the case.
"The quality of mercy is not strained, it dropeth as the gentle rain from heaven."
Top

vikkivale spent some time at the Los Angeles Library this weekend and was able to find the following ad. 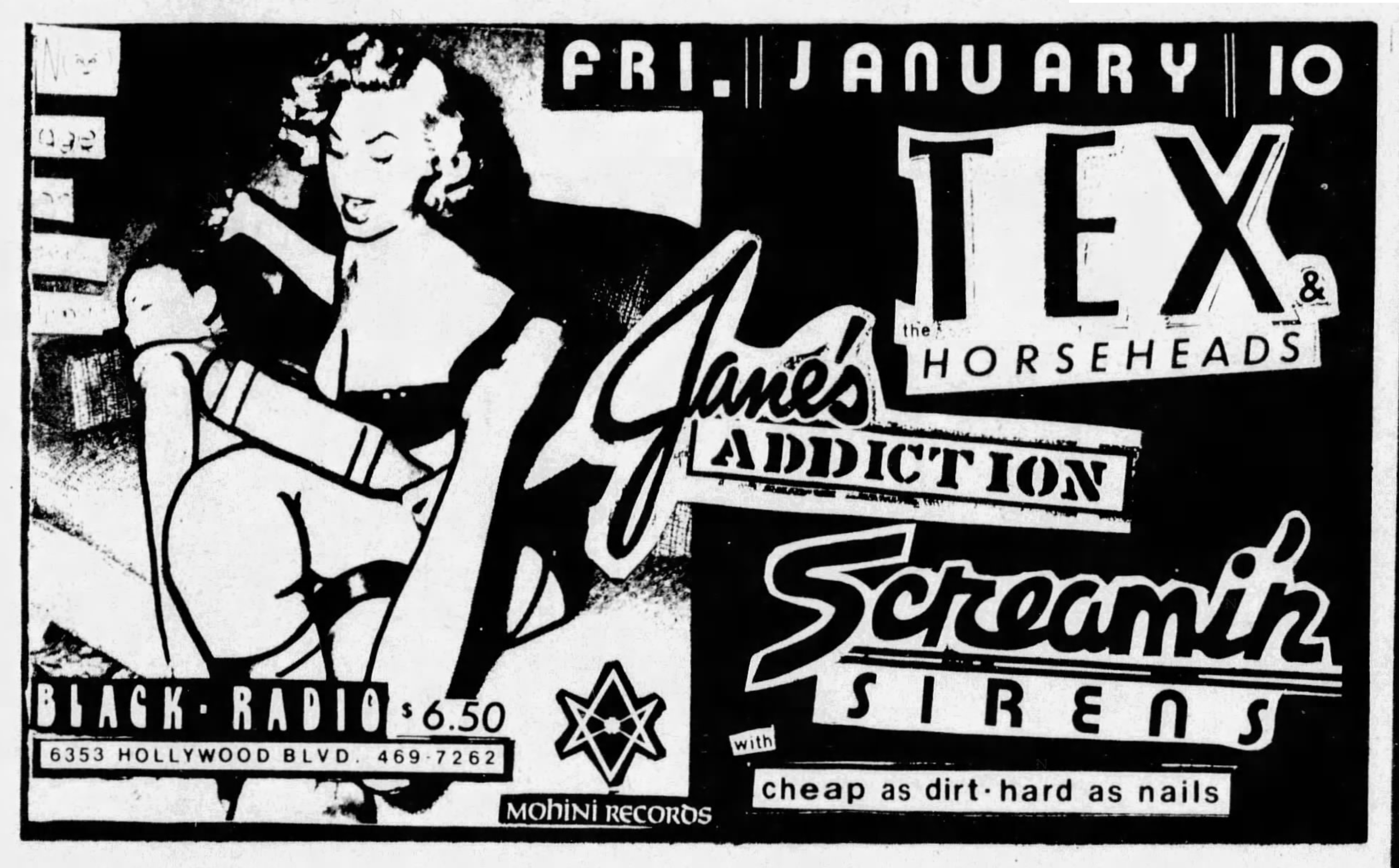 This ad ran in the L.A. Weekly's dated January 3-9, 1986 and January 10-16, 1986. (both ads are identical)
The reel this ad was found on had been missing and I was unable to view it a few years back when I was in L.A..
I had asked them to replace it at the time and when I was out there earlier this year they had.
It was the first thing vikkivale looked at when she was at the Library this weekend.
I expected it to have at the very least info on a couple of shows but this was the only mention of Jane's.

The reason I posted it in this thread is because I have previously searched the September and August 1986 reels of the L.A. Weekly and found no mention of Jane's playing at Black Radio.

I think it stands to reason that had Jane's played at Black Radio on August 1, 1986 that I would have found an ad for the show on the reels I searched seeing as there are ads in the January issue for the January 10th show.
Last edited by Mike on Mon Sep 07, 2020 4:19 pm, edited 1 time in total.
Reason: Repaired broken image link
"The quality of mercy is not strained, it dropeth as the gentle rain from heaven."
Top

Just gonna post this here so nobody thinks this flyers use on the Sterling Spoon box set got past me.

EBDBD027-5124-41B8-AC3D-DC48EB6258C9.jpeg
You do not have the required permissions to view the files attached to this post.
"The quality of mercy is not strained, it dropeth as the gentle rain from heaven."
Top
Post Reply
6 posts • Page 1 of 1