Here's another brand new show for the gig listing.
This one dates back to the time the band were touring the country opening for Iggy Pop.

http://www.dimeadozen.org/torrents-deta ... ?id=298009
"The quality of mercy is not strained, it dropeth as the gentle rain from heaven."
Top 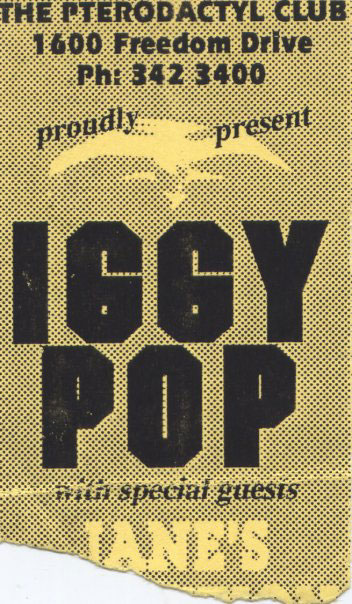 Last edited by Mike on Tue Feb 18, 2020 7:23 pm, edited 1 time in total.
Reason: Repaired broken image link
"The quality of mercy is not strained, it dropeth as the gentle rain from heaven."
Top

it'd be helpful if that ticket had a date

http://goto.glocalnet.net/igged/IGGY%20 ... 201986.htm
"The quality of mercy is not strained, it dropeth as the gentle rain from heaven."
Top

Hallo there, glad to read something about Iggy Pop tour in 1988: Live at channel Boston in 1988 is the better live records that i've ever heard. I like so much cause line up include the legendary guitarist of Hanoi Rocks Andy Mccoy. Andy rearranged all Iggy's stuff as he said to me on his guestbook web site and confirmed to me when we met after Hanoi Rocks reunion gig here in Italy some years ago. Hanoi Rocks toured in early eighties with punk rock band UK SUBS: bassist Alvin Gibbs is Andy Mccoy friend called by him to play with Iggy! Jane's Addiction opening for Iggy's Band in New York. Bowie was there at that show! It seems that Andy Mccoy left the stage cause he didn't accepted Iggy's disappointed about an andy's mistake during winner and loser. Iggy was really nervous and wanted to gave the better impression to Bowie, but despite this Andy "the real only one" Mccoy left the stage and Iggy with his embarassment. So Iggy gone to Andy backstage praying Andy to return to the stage!

It's just a curiosity...excuse me if i am off topic! Bye
Spazio e confine, confine ultimo, volo
Top

Just to let you know, i'm not a visionary

Here’s a listing for this date.
Listing taken from the Charlotte Observer dated October 21, 1988
You do not have the required permissions to view the files attached to this post.
"The quality of mercy is not strained, it dropeth as the gentle rain from heaven."
Top
Post Reply
7 posts • Page 1 of 1